Independent Retailer
Established 2002 - Huge UK Stocks
Home » What is “glow in the dark” and how does it work?

Glow in the dark - how does it work? 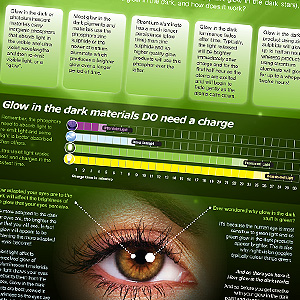 Glow in the dark or photoluminescent materials carry inorganic phosphors that absorb light in the visible and ultra violet wavelengths and then re-emit visible light, or a "glow".

Most glow in the dark pigments and materials use the phosphors zinc sulphide or the newer strontium aluminate which produces a brighter glow over a longer period of time.

Strontium aluminate has a much longer persistence (glow time) than zinc sulphide and so higher quality glow products will use this phosphor over the latter.

Glow in the dark luminance fades after time. Typically, the light released will be brighter immediately after charge and for the first half hour as the atoms are excited and will begin to fade gently as the atoms calm down.

Glow in the dark materials DO need a charge

Remember, the phosphors need to absorb light to re-emit light and some light is better absorbed than others. Ultra violet light works best and charges in the fastest time.

Approximate charge times for glow in the dark products are as follows:

It's all down to perception... 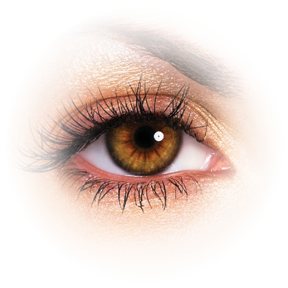 Ambient light affects the perceived glow of photoluminescent materials as the light draws your eyes and detracts them from the darkness. Glow in the dark products are best viewed in total darkness as the eyes are allowed to adapt, perceiving a much brighter glow.

Ever wondered why glow in the dark stuff is green? It's because the human eye is most sensitive to green light and so green glow in the dark products appear brighter. This is also why night vision goggles typically colour things green.

And so there you have it

How glow in the dark works. And so before you get creative with your glow in the dark paint and decorations, have a think about how much ambient light will be around the item, do bare in mind that even moonlight or street lighting shining in through a window is considered ambient light and will prevent your eyes from adjusting totally to darkness. Also consider how best to achieve maximum charge.